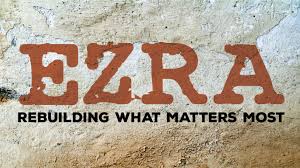 Introduction: Israel was carried away into exile by the Babylonian Empire of Nebuchadnezzar in 586 B.C. The nation had been overthrown by a foreign power because of both idolatry and oppression of the poor in the community. Israel was called by God to be light to the nations of the world to teach them the value of monotheism and that there is only one true God. However, Israel engaged in activities that made them take on the customs of the surrounding nations where idolatry and greed were commonplace.

For years the prophets such as Jeremiah, Isaiah and others warned of pending judgment if the nation did not change but Israel would not heed their warning and the nation was overthrown by the Babylonians. Before carrying many of the people into exile to serve as servants and slaves, much of Jerusalem was destroyed including the Temple. Some of the artifacts used in temple worship were also carried away and the city of Jerusalem laid to waste.

The Temple was a valuable symbol to Israel’s identity both religiously and politically. A ruined Temple meant that the nation was ruined and without power. But God demonstrates his power to move in unexpected ways and through unexpected persons to restore and redeem. The time of punishment was past, and the people were given the opportunity to return to Jerusalem and rebuild the Temple and the city.

In 539 Cyrus, king of Persia, overthrew the Babylonian Empire and as the new ruler of conquered lands reversed the deportation polices of the Babylonians and issued a decree of amnesty. This  allowed captives to return to their homelands and practice their own religions if they did not engage in political rebellion against Persia.

Why do you think God used a king that did not worship him to return Israel from exile?

How did Cyrus’ actions motivate Israel to return and start the work of rebuilding the Temple?

Where did the resources come from for Israel to rebuild the Temple?

What barriers did those planning to return to Jerusalem encounter that could have caused second guessing on a possible return?

What sources of leadership emerged to guide the return and the building of the Temple?

Exposition: A King Moved by God. (Ezra 1:1-4)
The lesson begins by making clear the decision made by Cyrus was a decision caused by God moving upon Cyrus to act on behalf of Israel. Without the movement of God upon the new king there is no political nor economic decision that would justify a change in the policy of deportation. There was no interest in a conquering king wanting to see the nations around him restored or strengthen. Cyrus indicates some concern about potential rebellion against Persia by stating the decree is intended for those who pledge loyalty to Persia by not rebelling against the empire.

God moved on Cyrus’ heart to cause a king who did not worship God serve God’s interest.

We should always be mindful of this story and not place artificial barriers upon who God can use and how God will use them. God is not obligated to follow a cookie-cutter approach that makes logical sense to us to accomplish his will. There is no one outside the scope of potential that God may use for his purposes. There is always a role in life we play in changing our condition for the better. There are times when the change comes not from us immediately but from the people God moves upon to make the change possible. Moved by God, Cyrus did what may not have been politically expedient.

A People Moved By God (Ezra1:5-11)
In order for the people to actually return to Israel, they had to be willing to return and they needed resources to make the return possible. Whereas the decree grants the permission to return home, there is the practical matter as to how will they do it? Again, God moves upon persons to take leadership to help make the return to Jerusalem possible. Two key tribes emerge as leaders in the effort--Judah and Benjamin. It is worth noting that these are the tribes where the bulk of the former kings of the nation had come from with the two most will know being Saul, Israel’s first king, and David, Israel’s most beloved king.

Leadership matters and someone had to take on the responsibility of organizing the work of the return and determining what resources would be needed.

In addition to leaders from Judah and Benjamin were the Levites. The Levites were critical because they had been the keepers of the religious tradition in exile and servants within the Temple carrying out the religious rituals. During the 70 years spent in exile, it would have been easy for the people to forget the rituals and to understand what was to occur in the Temple and how the Temple was to be built. The Levities were the keepers of the institutional knowledge necessary to carry out rebuilding the Temple as the number one priority.

Institutional knowledge helps to maintain the values that are transferred to each succeeding generation. The values inform the community on why we do what do. God moved upon the heart of the people, and they made the necessary preparation to return to Jerusalem and rebuild the Temple.

God’s movement upon the heart of the people also led to acts of generosity. Immediately the people began to give out of their resources to assist with the rebuilding effort before they even arrived in Jerusalem. Once the people understood what would be required to build the Temple, they gave from their own resources to provide what was needed. Their gifts varied in value but each gift mattered and each gift motivated others to give as well.

Giving can foster a sense of unity of purpose. The gifts of the people even led to Cyrus making a gift to support the rebuilding of the Temple. Cyrus’ gifts were the return of the items stolen by Nebuchadnezzar from the Temple in Jerusalem when he overthrew the city. God redeems things as well as people and returns them to their rightful place.

A Place Moved by God Ezra 2:64-70
43,360 people left exile and returned to Jerusalem. Ezra gave an indication of the resources needed to return the people to Jerusalem. The number reflected God moving upon Israel to restore the land with the people who called it home. The land was without value if it was not occupied by people who would work the land and hold it to yield the produce that it was possible to provide. Without people the land could become desolated and unproductive, but people made a difference and were able to transform the land. God intended for the land to be a source of blessing.

However, God moved upon the Temple as well as the people immediately got to work to rebuild the Temple. The people made a second gift as soon as they arrived in Jerusalem for the purpose of rebuilding the Temple. The gifts reflected the community’s commitment to the purpose for their return home. They were home to worship God and give him the glory for his deliverance. Their purpose was to restore the ritual of Temple worship and to reclaim a people to faith in the one true God.