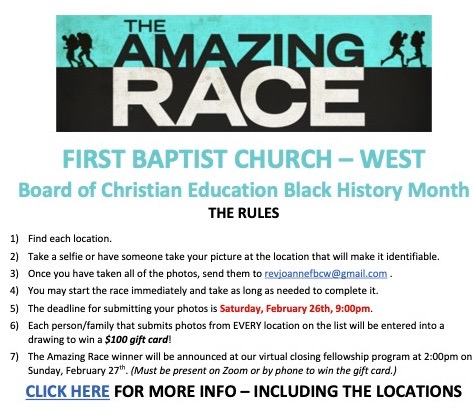 Here are the locations (in alphabetical order):

Billingsville Elementary School – Located at 124 Skyland Avenue, in Grier Heights. Billingsville School was built in 1927 and was named for Sam Billings, who donated the land where the school stands. The school was one of Mecklenburg County’s 26 Rosenwald schools, which were all-black schools built with the help of money donated by philanthropist Julius Rosenwald. It was the first county school to become a city school through annexation.

Excelsior Club - Located at 921 Beatties Ford Road, the Excelsior Nightclub held the title as the Southeast’s leading private African-American social club for many years. When it was established in 1944, it was one of the largest of its kind on the entire East Coast.

First Baptist Church-West – Located at 1801 Oaklawn Avenue, celebrates its 155th Anniversary this year. In 1867, former slaves resisted being herded into the balcony of predominately white First Baptist Church and were granted letters to form their own church in June 1867. A year later, the First Baptist Church (for Negroes) was formally organized. First Baptist remained at 1020 South Church Street until it  fell victim to urban renewal and was razed during the 1970's. The church was relocated to its present location where dedication services were held in May 1977. In the years following, the word "West" was added to the church’s name.

Good Samaritan (Sam) Hospital Marker – Located outside of the Bank of America Stadium. North Carolina’s first private hospital for African-Americans (1891-1961), Good Samaritan served its patients through the Jim Crow era, but as Charlotte’s other institutions integrated, Good Sam’s fortunes declined. Even though the institution is gone, some of the problems of discrimination and disparity that Good Sam addressed persist in medicine today.

Grace A.M.E. Zion Church - Located at 219-223 S. Brevard Street, this historic AME Zion church was built in 1901-1902, and is a Gothic Revival style brick church. It is one of the oldest of the remaining African American churches associated with Charlotte’s historic black districts. It was added to the National Register of Historic Places in 2008.

Levine Museum of the New South - Located at 200 E. Seventh Street The centerpiece of Levine Museum is the award-winning exhibit, Cotton Fields to Skyscrapers: Reinventing Charlotte and the Carolina Piedmont in the New South. Spanning 8,000 square feet and including more than 1,000 artifacts, images, video clips, music, and oral histories, the exhibit uses Charlotte and its 13 surrounding counties as a case study to illustrate the profound changes in the South since the Civil War.

Little Rock AME Zion Church - Located at 403 N. Myers Street, the original Little Rock A.M.E. Zion Church is one of Charlotte’s oldest churches. The church was formed in the early 1870s as Blacks were struggling to find their identity after the Civil War.  Take notice of the shotgun houses in the parking lot.

Martin Luther King, Jr. Memorial Sculpture – Located along E. 3rd Street in Marshall Park. Although there was controversy about the design of this sculpture, it honors the renowned civil rights leader.

McCoy Slave Cemetery - Located on McCoy Road off Beatties Ford Road, it was uncommon for slave burial sites to be marked with more than a rock, if anything at all. Which is why markers from the 1920s found at the site are highly unusual. It is believed that the family of the slave owner used the markers to express devotion to two slaves, “Uncle Jim,” and “Aunt Lizzie.”

Romare Bearden Park – Located at 300 S. Church Street was inspired by world-renowned, Charlotte-born artist Romare Bearden. His life and art are marked by exceptional talent, encompassing a broad range of intellectual and scholarly interests, including music, performing arts, history, literature and world art. Bearden was also a celebrated humanist, as demonstrated by his lifelong support of young, emerging artists.

Thaddeus Tate Statue – Located at Little Sugar Creek Greenway, 1133 Metropolitan Ave on the Trail of History.  Tate was a founding member of Grace A.M.E. Zion Church and led efforts that resulted in Charlotte officials agreeing to support the creation of the Brevard Street library. He also invested his earnings in businesses that helped other black entrepreneurs as the director of the Mechanics' Perpetual Building and Loan Company.

W.T. Alexander Slave Cemetery – Located in the center of Thornberry Apartments, near the intersection of Mallard Creek Church Road and U.S. 29.  This burial ground has over 70 graves.